Can you believe August is almost over? What’s ahead for 2015 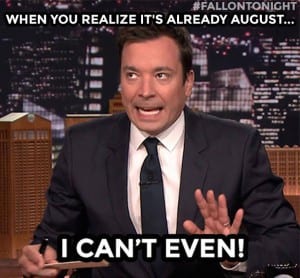 This week, we’re with Fallon. There has been so much going on in HR and employment this year. Our heads have been on a swivel keeping up with compliance, and the trend shows that we’re likely to have far more compliance news in the future rather than less. This is the case for those who deal only with federal and state compliance as well as those working with NCMS.

Are you ready for Q4? To help you prepare, we’ve put together a quick overview of the rest of the year (courtesy of SHRM), what’s happening now in labor & employment law that you need to be aware of and what has happened this year.

What has happened in employment and HR

Where’s HR in this scenario? 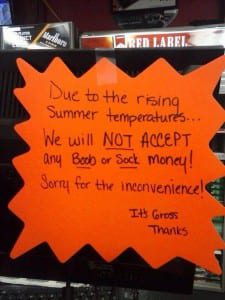 If you’ve ever seen a sign like this, it makes you wonder, where was HR when someone pulled out the Sharpie? There are many “policies” put in place or things said that would make the HR person cringe if they knew.

Here are just a few examples. Join us on facebook for more, or to add your own!

Fired by text message (WSJ):  The messages began, “Hi Juan, I wanted to speak with you in person about what’s going on. In general, we feel that you have out grown the company and it would be better for your career to move on.” The last messages said, “You were great this year and we thank you for being with us. I think we both realized it but never said it aloud.”

Things my boss has said: Me: My godmother has passed away, and I am going to need to leave a little early on Thursday in order to make it to the wake. I’ll also be a little late getting in on Friday, since the funeral is in the morning. My boss: Well, how close were you to this person? You can’t just take off of work every time someone dies. (Warning: many of the conversations posted on this site are NSFW.)