The economy continues the growth trend of 2015, and most predictions continue to be positive, despite reports of deflation. As hiring continues, employers should take a careful look at their background screening process. More companies are ending up in the spotlight of the FCRA and EEOC for adverse action and disclosure form errors, while others are leaving their customers unprotected by insufficient background checks. 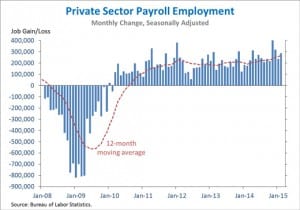 A strong jobs report in February, despite record snow throughout the Northeast, creates a positive economic storyline for early 2015. The private sector continues to add jobs, and primary industries for growth are leisure and hospitality, followed by business and professional services.

St. Louis Post-Dispatch: Cable repairman’s past should have been caught in background check

Should have is not good enough. In this case, Charter Communications and Broadband shared responsibility for performing a thorough background check, but neither checked the applicant’s employment references (they were fabricated) or interviewed his personal references (they would have reported mental instability). He attacked one of his clients and is now facing 75 years in prison. The companies’ role in this has yet to be assessed.

The Atlantic: Are companies with strict drug testing policies weeding out great candidates?

In the case of marijuana use and employment, the decision still rests firmly with the employer. The conflict between state and federal law allows employers to either enforce a no drug policy in any state, whether recreational marijuana is legal or not. However, more states, and even the FBI, are re-evaluating their prior drug use policies when it comes to marijuana as now more than half of all college students report experimenting with marijuana.

In this case, the pre-adverse action notice was received after the company rescinded the applicant’s offer of employment, causing a violation of the FCRA rules. Despite the company’s argument to the contrary, the court ruled in favor of the applicant. The sequence of events after adverse information on an applicant is discovered is essential.