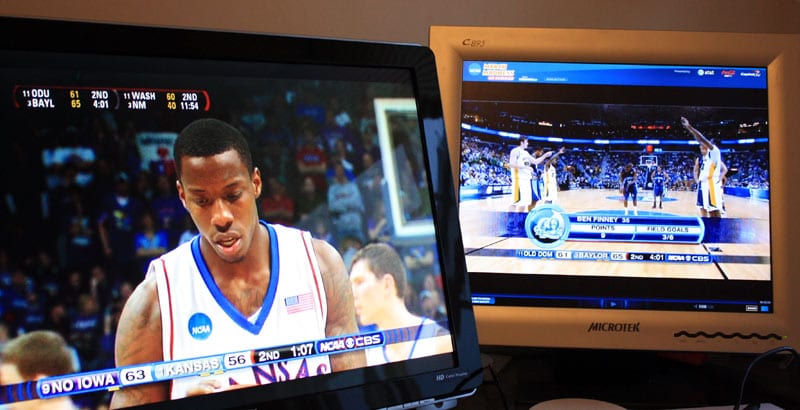 How do employers balance the reality that employees will participate in March Madness (watching and employee brackets) and the need to get the job done? Challenger, Gray and Christmas recommends just letting go this month.

“Efforts to suppress the Madness would mostly likely result in long-term damage to employee morale, loyalty and engagement that would far outweigh any short-term benefit to productivity,” Challenger said. “And, with labor markets getting tighter and tighter, employers would be better off embracing March Madness.”

So, join an employee pool, plan to spend some time in front of your favorite streaming device, and join the March Madness spirit.

So, you know you’re losing productivity, and in a small business, even a small loss hurts. However, you can make the most of March Madness by enjoying the boost in morale and productivity that comes from employee pools and shared watching time. When we all know that employee engagement is at an all-time low, it’s a win when you can get your team pulling together.

Who else is writing about March Madness today?

Time: Why Monitoring Employees’ Social Media Is a Bad Idea

Ten years ago, employers were taking about limiting employees’ social media access all together. Now, that conversation is no longer even on the table as employees are part of our voice on social media, our web presence. So, if you can’t remove social media access, should you monitor it? Time says no. Monitor your employees, and they will find a way around it (and likely they will spend more time going around you then they would have in the first place!). Set guidelines, have clear expectations of employees representing the company on social media, but know that it is part of our societal fabric now.

Fast Company: Why 2016 is the year of the hybrid job

Thanks HRMarketer for the direct.

Though the title is different, this is another article pitching the importance of EQ and IQ. It’s not enough to be smart, you also need to know how to work with a team and manage yourself. The trend is widespread and shows no signs of abating in the near future.