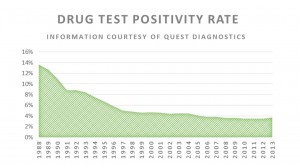 Now more than ever, companies must have a drug screening policy in place for their candidates and employees.
As states consider and pass laws permitting medicinal and recreational marijuana, employers must be aware of the laws in their state and how these new drug use policies affect their employment policies. At this time, there have been no policies allowing drug use in those positions that require Department of Transportation (DOT) standards, so companies that adhere to these rules have a clear line to hold. However, a small to mid-sized company without a drug testing policy in place is at the mercy of its employees.