Weekend Round Up: Hiring, Interviewing and Recruiting 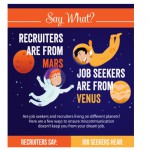 You say one thing, the candidate hears another (e.g., You say, “We’ll be in touch” and the candidate hears, “I’ll call you everyday with an update on your dream job.”) It may have been years since you’ve been in the job market—this article and infographic from Mashable provides a refresher that will help you keep the top candidates in your talent pool.

Google, Apple, facebook and Twitter—they have something in common other than being consistently ranked the best place to work. They also have a low proportion of women to men. So, why should you hire women, other than because it’s more socially acceptable? You should hire more women because of what they can do for your company. Read on. 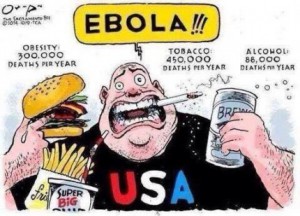 If you’re in North Texas (or pretty much any other parts of the U.S.), this is becoming more of a reality. Companies and families are panicking, and school districts are calling home to every parent if they have had anyone who even remotely might have shared air space with someone who had shared air space with someone who had Ebola. Six Degrees of Kevin Bacon has now become Six Degrees of Ebola. Before you rewrite your HR policy, consider this.

Here’s the complete infographic for “Recruiters Are From Mars, Job Seekers Are From Venus” from Mashable.com. Have a great Monday!