What NYC Ban the Box policy means to Texas employers

Texas is not New York. And, if you’ve seen even one Pace commercial and nodded your head in agreement, you know what we’re saying.

But, what about employment? How do the employment policies passed in New York City affect Texans? While there’s not a one-to-one relationship here, we’re going to take a closer look at the law, compare them with national trends and see how that trajectory might impact Texas employers and HR professionals.

In June 2015, the NYC mayor signed a new and wide-reaching Ban the Box law that affects both city and private employers. The law went into effect October 27, 2015, and it will have a significant impact on how and when employers perform searches. With the help of a recent Lexology article, we’ll break it down for you. 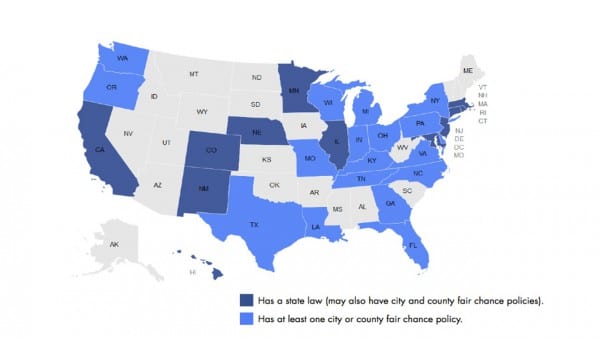 Ban the Box is spreading in 2016, and this trend is likely to continue. In Texas, we have Austin and Travis County that have implemented the Fair Chance policies. Several corporations operating in Texas also follow the Ban the Box policy. President Obama has also recently come alongside the Ban the Box movement, legislating that the Office of Personnel Management must follow Ban the Box protocol in their hiring practices.

So, what exactly does Ban the Box mean? Contrary to common commentary, it does not mean that employers are forced to remain in the dark about a prospective employee’s criminal record. What it means is that employers cannot ask about a criminal conviction on the application form or in the first stage of the hiring process.

NYC has taken that a step further and said that employers may not ask about a criminal record before making a conditional job offer.  In the language, this states that this does not apply to every position, but for those it does apply to, this may be a significant change.

How does this affect Texans?

Texas tends to lean in favor of its employers in most cases, but it’s likely that more and more jurisdictions will be considering a Ban the Box or Fair Chance policy in the near future.

For now, it is critical that employers consider each position and the screens best suited and most necessary to that position. Also, employers must know the laws in their area, especially if they operate multiple locations.

Need to know the employment screening laws in your area? See the KRESS Inc. compliance map.

Please review all changes to your employment process with your legal team. We do have an employment lawyer on staff, but this blog is now a qualified source for legal advice or counsel.